Here at GBPL we have the Open Book club. We always enjoy seeing new faces and everyone is welcome!

Open Book Club meets on the third Tuesday of the month in the magazine area at 7pm. Join the Facebook Event!

Copies of the book are usually available at the Welcome Desk or digitally through Libby, cloudLibrary, or hoopla

Join us on Goodreads! If you cant make it in person, discuss it online!

The Secret, Book & Scone Society by Ellery Adams |
January 18th
Miracle Springs, North Carolina, is a place of healing. Strangers flock here hoping the natural hot springs, five-star cuisine, and renowned spa can cure their ills. If none of that works, they often find their way to Miracle Books, where, over a fresh-baked “comfort” scone from the Gingerbread House bakery, they exchange their stories with owner Nora Pennington in return for a carefully chosen book.

The 7½ Deaths of Evelyn Hardcastle by Stuart Turton |
February 15th
Aiden Bishop knows the rules. Evelyn Hardcastle will die every day until he can identify her killer and break the cycle. But every time the day begins again, Aiden wakes up in the body of a different guest at Blackheath Manor. And some of his hosts are more helpful than others. With a locked room mystery that Agatha Christie would envy, Stuart Turton unfurls a breakneck novel of intrigue and suspense.

Premeditated Myrtle by Elizabeth C Bunce | March 15th
Twelve-year-old Myrtle Hardcastle has a passion for justice and a Highly Unconventional obsession with criminal science. Armed with her father’s law books and her mum’s microscope, Myrtle studies toxicology, keeps abreast of the latest developments in crime scene analysis, and Observes her neighbors in the quiet village of Swinburne, England. When her next-door neighbor, a wealthy spinster and eccentric breeder of rare flowers, dies under Mysterious Circumstances, Myrtle seizes her chance.

Dial A for Aunties by Jesse Q. Sutanto | April 19th
When Meddelin Chan ends up accidentally killing her blind date, her meddlesome mother calls for her even more meddlesome aunties to help get rid of the body. Unfortunately, a dead body proves to be a lot more challenging to dispose of than one might anticipate, especially when it is inadvertently shipped in a cake cooler to the over-the-top billionaire wedding Meddy, her Ma, and aunties are working at an island resort on the California coastline. It’s the biggest job yet for the family wedding business—”Don’t leave your big day to chance, leave it to the Chans!”—and nothing, not even an unsavory corpse, will get in the way of her auntie’s perfect buttercream flowers.

The House in the Cerulean Sea by TJ Klune | May 17th
When Linus is unexpectedly summoned by Extremely Upper Management he’s given a curious and highly classified assignment: travel to Marsyas Island Orphanage, where six dangerous children reside: a gnome, a sprite, a wyvern, an unidentifiable green blob, a were-Pomeranian, and the Antichrist. Linus must set aside his fears and determine whether or not they’re likely to bring about the end of days.

Into the Deep by Robert Ballard | June 21st
Best known for finding the doomed ship Titanic, celebrated adventurer Robert Ballard has a lifetime of stories about exploring the ocean depths. Now he gets personal, telling the stories behind his most exciting discoveries-including how a top-secret naval mission provided the opportunity for his Titanic discovery-and opens up about his private tragedies.

Seafire by Natalie C Parker | July 19th
After her family is killed by corrupt warlord Aric Athair and his bloodthirsty army of Bullets, Caledonia Styx is left to chart her own course on the dangerous and deadly seas. She captains her ship, the Mors Navis, with a crew of girls and women just like her, who have lost their families and homes because of Aric and his men. The crew has one mission: stay alive, and take down Aric’s armed and armored fleet.

The Four Winds by Kristin Hannah | August 16th
Texas, 1934. Millions are out of work and a drought has broken the Great Plains. Farmers are fighting to keep their land and their livelihoods as the crops are failing, the water is drying up, and dust threatens to bury them all. One of the darkest periods of the Great Depression, the Dust Bowl era, has arrived with a vengeance.

The Dictionary of Lost Words by Pip Williams | September 20th
Esme is born into a world of words. Motherless and irrepressibly curious, she spends her childhood in the “Scriptorium,” a garden shed in Oxford where her father and a team of dedicated lexicographers are collecting words for the very first Oxford English Dictionary. Young Esme’s place is beneath the sorting table, unseen and unheard. One day a slip of paper containing the word “bondmaid” flutters to the floor. She rescues the slip, and when she learns that the word means slave-girl, she withholds it from the OED and begins to collect words that show women in a more positive light.

The Lost Apothecary by Sarah Penner | October 18th
A female apothecary secretly dispenses poisons to liberate women from the men who have wronged them—setting three lives across centuries on a dangerous collision course. Rule #1: The poison must never be used to harm another woman.
Rule #2: The names of the murderer and her victim must be recorded in the apothecary’s register.

Band of Sisters by Lauren Willig | November 15th
When charismatic alumna Betsy Rutherford delivers a rousing speech at the Smith College Club in April of 1917, looking for volunteers to help French civilians decimated by the German war machine, Kate is too busy earning her living to even think of taking up the call. But when her former best friend Emmeline Van Alden reaches out and begs her to take the place of a girl who had to drop out, Kate reluctantly agrees to join the new Smith College Relief Unit.

The Silent Patient by Alex Michaelides | December 20th
Alicia Berenson’s life is seemingly perfect. A famous painter married to an in-demand fashion photographer, she lives in a grand house with big windows overlooking a park in one of London’s most desirable areas. One evening her husband Gabriel returns home late from a fashion shoot, and Alicia shoots him five times in the face, and then never speaks another word.
Theo Faber is a criminal psychotherapist who has waited a long time for the opportunity to work with Alicia. His determination to get her to talk and unravel the mystery of why she shot her husband takes him down a twisting path into his own motivations—a search for the truth that threatens to consume him…. 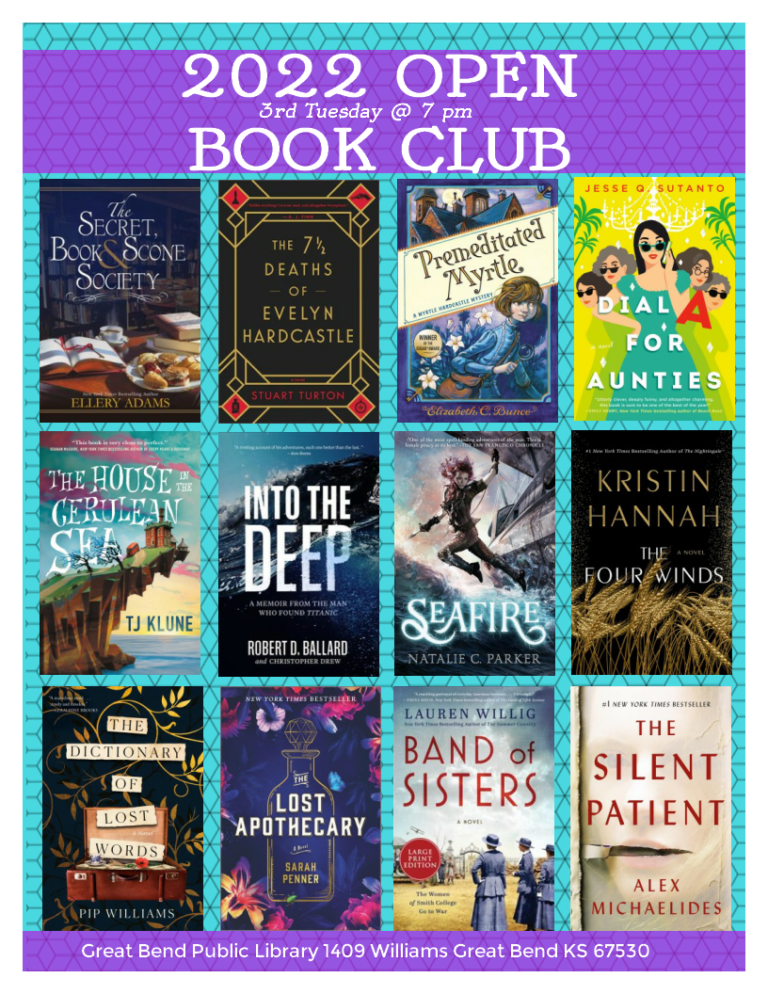 Current Hours
Monday-Thursday: 9am to 6pm
Friday-Saturday: 10am to 5pm
Sunday: Closed

Check out our TikTok!

The Great Bend Public Library fosters the spirit of exploration, lifelong learning, the joy of reading, and the pursuit of information and knowledge.

We still have spices left to make your own dry rub

A big thanks to Jake from the Sternberg Museum for

This week we sailed the seven seas and learned abo